You are here: Home1 / Multicultural Initiatives 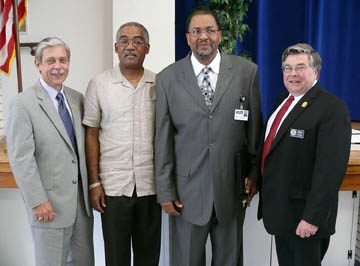 The event begins at noon at Bartow Civic Center.

A guest speaker is chosen to give the keynote address. Awards are given to a business or organization and an individual who have shown a commitment to diversity in the City of Bartow, or in surrounding communities, through mentoring, outreach initiatives, or other activities that advance the goal of inclusion.

Tickets for the luncheon are $15 each and may be purchased from the Greater Bartow Chamber of Commerce, 510 North Broadway, one month prior to the event.

The C.C. Corbett award winners are traditionally announced by the CRC Co-Chairs.

“Before the passing of our friend and former Chairman, C.C. Corbett, it was his desire and the desire of the Community Relations Committee to recognize an individual and a business or organization that made it a priority to promote diversity in our community,” Mrs. Gloria Washington, CRC Co-chair, said at the last event.

“The City of Bartow and the Community Relations Committee will continue to honor C.C.’s dedication to diversity by awarding the C.C. Corbett Diversity Awards.”

Two awards are given each year: one to an individual and one to a business or organization honoring them for promoting unity within the Greater Bartow area.

Remember to get your nomination forms in a week before the event.

• 8 general seating tickets to the event

• 4 general seating tickets to the event

• 2 general seating tickets to the event

Want to join the discussion?
Feel free to contribute!