“Imperial Moments, a look at Polk’s Past”

We often take for granted the wonder of light.  Turning a switch or pushing a button is second nature when entering a dark room.  The lights on our streets are rarely missed until a power outage occurs.

Lighting in homes and streets prior to the turn of the 20th Century was largely with kerosene lamps or candles.  Many of the larger municipalities like Tampa turned to gas for lighting (1895), not only in common and public areas, but also in homes. 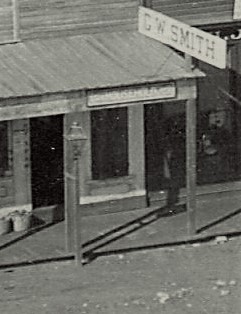 Street lighting from 1891 through the turn of the 20th Century was provided by oil street lights. The city employed a lamp lighter to light and extinguish the individual lights in the business section of downtown Bartow. This light was located on the west side of Broadway in the center of the block across from the courthouse.

The City of Bartow was looking to civic improvement, when in 1891, 50 oil lamps were installed along Main Street from the main business block near the courthouse to the South Florida Railroad Station depot.  The depot was located between Main and Parker Street on the east side of the tracks, just north of Oak Hill Cemetery.  A city lamplighter was employed at $35.00 per month to nightly make the rounds and bring light to the main thoroughfare.

The technology of the day was racing forward.  Thomas Edison had perfected his carbon filament light bulb in 1879 and arc lights were commercially available around the same time.  The stage was already set for an enterprise to banish darkness in Bartow.

Oil lamps on city streets were not meeting the need.  In February 1897 the local newspaper proclaimed, “Darkness shall vanish before the brilliant lights of Bartow’s Electric Plant.  The machinery bought and paid for and poles being cut!”  The news was followed closely by the citizens.

The man with the vision to illuminate the city was William H. Towles of Fort Myers.  He was a cattleman, businessman, popular, known throughout the state, and reported by newspapers as being handsome as well.

Towles employed James N. Baggett, an electrician, and veteran of five years’ electric service as the superintendent of the already functioning Ocala Light Plant in that city.  He was to oversee the start up and operate the Bartow venture.

Baggett took up residence on Davidson Street, was noted to be an energetic worker and more than capable of overseeing the entire operation. 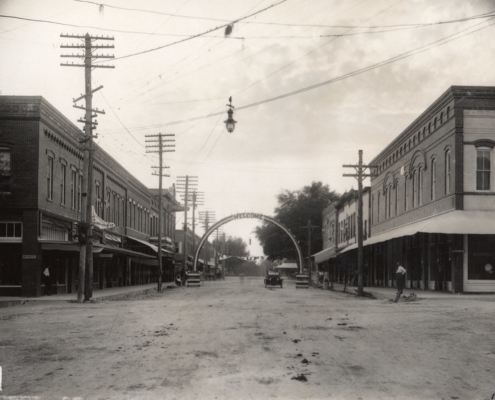 The photo image is in the Lloyd Harris collection, but the original is courtesy of Sally and Dudley Putnam. This is an image of Main Street looking west from Wilson Avenue in 1910. Note the arc light suspended over the street.

The City Council was quick to agree with Towles of the effectiveness and benefit that electric lighting would bring to the town.

On February 25, 1897 a contract was signed and work commenced immediately.  The Tampa Weekly Tribune reported, “Bartow is soon to join the ranks of her progressive sister cities.  The poles are all up for the new electric light plant and in of 40 days time, Mr. W. H. Towles expects to have it completed.”

Construction of the Bartow Electric Light Works commenced.  The electric light plant was located on Church Street, on a lot adjoining the city water works, next to the fire engine house.

A modern marvel of the age, the new building boasted an ironclad room with dimensions built at 65’ x 30’, well finished with tile floor, and fitted with the necessary appliances.

A steam powered boiler, powered a Davis-Farrar engine turning out 50 horsepower, furnished the power to drive the LaRoche Dynamo producing electricity.  A second boiler and water pump, to provide 15,000 gallons per hour, was also installed.

The contract for lighting the town included an assessment of $12.50 per month, with a provision to accommodate 12 to 15 arc lights for exterior lighting, and 600 incandescent lights for businesses and homes.  The lights would be provided power to burn all night and with the 50 horsepower dynamo providing the energy. This load was reaching the initial service capacity of the engine.

Bartow would soon shine as a first class city.

The Bartow Electric Light Works was completed in just over six weeks.  Six arc lights were installed.  An arc light was a lamp that produces light by an electric arc (also called a voltaic arc) and was considered one of the first practical electric lights.  The exterior arc lights were placed in strategic positions; one at the county jail (present site of the Bartow Fire Department), one at the northeast corner of the County Courthouse, one at the southwest corner of the courthouse, one near the Railroad Express Office, one at the corner of Main Street and Oak Avenue, and one at Summerlin Institute, (Summerlin Institute was the high school then located north of present day Bartow Elementary Academy).

Bartowans proudly rejoiced – “Let the Lights Shine!”  Darkness vanished on Tuesday night, April 13, 1897, when the great switch was thrown, sending power surging down the lines to the big arc lights.

The drone of the dynamo became a daily sound in the city, and the illumination of Bartow night was now a dream come true.  Within three months another dream was reported in the Tampa newspaper.  It seems there were plans to create an electric street railroad to nearby Kissingen Springs and local phosphate mines.  The electric railroad was not realized, electrical lighting continued to expand.

William Towles sold the Bartow plant, in 1903, to the Florida Electric Company of Jacksonville.  Two more dynamos, and a new, larger boiler was installed.  Extensive expansion and improvements were planned, but soon ran into troubles.  It seems that the power production wasn’t up to standard and the City of Bartow, not unmindful of the necessity of the new convenience, purchased the power plant the same year, and entered the business of power production.

Within five years the city power plant was providing service to more than 2,500 incandescent lights, 10 arc lights, and 60 50-candle power incandescent lights.  Rates had dropped to 10 cents per kilowatt hour and in 1908 the charges for electric power in Bartow was found to be cheaper than Tampa, Key West, and Lakeland. There was no going back, yet after 11 years, the lights and electricity were available only in the evening.  It wasn’t until the next year, 1909, that power was extended to a full 24-hour current season.

Power outages, falling oaks, and hurricanes might cause us to bring out those alternative sources of light, and it is then we find that the electrical services are not to be taken for granted.  The City of Bartow’s Electrical Department is composed of the finest public servants – hat’s off to them, and – Let the Light shine in Bartow! 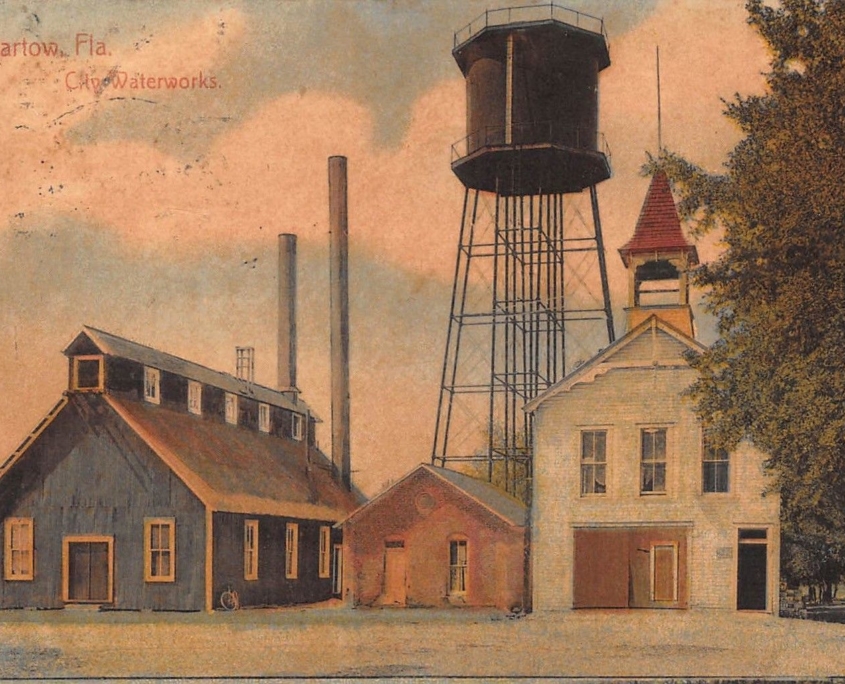 An early Bartow Postcard dated 1908 depicting municipal buildings on Church Street. The building on the left was the Bartow Electric Light Works, the small brick structure was the pump house serving the 75 foot water tower, and the building that looks like a small church was actually Bartow’s first City Hall and Fire House (Station). The City Hall stood on the corner of Church Street and Wilson Avenue and was later re-purposed as a home. (image courtesy W. L. Harris collection)

King of the Crackers