Oh What a Sunday!

You are here: Home1 / Capital City Bartow2 / Oh What a Sunday!

Oh What a Sunday!
Imperial Moments Homer Rodeheaver, song leader, and Rev Billy Sunday strike a pose with Clarence Boswell (1869-1941) behind. Boswell drove the two back to Tampa at the conclusion of the service in Bartow. Clarence Boswell Jr. (1902-2005) rode in the backseat with Rev Sunday.

Sunday, April 6, 1919 was a red letter day for Bartow and Polk County.  Two thousand automobiles and eight thousand people gathered all morning to hear a former professional baseball player speak.   The numbers may not seem significant but one year later the 1920 U.S. Census reported that the entire population of the city of Bartow was 4,203 individuals.  Winter Haven’s population was 1,597 and a crowd of 8,000 exceeded the sum total of Lakeland’s count of 7,062.

The baseball player was William Ashley Sunday, better known as Billy Sunday, minister and evangelist.  Born on November 19, 1862 in a two room log cabin near Ames, Iowa, he grew up in orphanages and left the farm to become a professional baseball player.  Between 1883 and 1890 he played for Chicago, Pittsburgh, and Philadelphia and was considered one of the fastest base runners in the league.

After leading a vice ridden life in Chicago, he became a devoted Christian and left a lucrative baseball career to become a spirit filled, evangelical gospel preacher.  He was ordained in the Presbyterian Church yet his ministry was considered non-denominational. His message and flamboyant delivery was popular and his revival campaigns drew thousands wherever he went.  Among his friends and acquaintances were presidents and prominent men and women and his message centered on salvation and social reform.

For three weeks leading to Easter he spoke in Tampa before record numbers.  The Lakeland Evening Telegram newspaper as well as others kept pace by printing front page articles during his brief stay in the area.  The casino at the Tampa Bay Hotel (now the University of Tampa) and the fairgrounds adjacent to the hotel hosted this popular orator.

Bartow’s local churches, civic organizations, and the Board of Trade (Chamber of Commerce) requested Reverend Billy Sunday to come to Polk County.  A delegation from the city went to Tampa by train. Reverend Sunday agreed to come to the county seat for one service at 10:00 a.m. Sunday morning on April 6, 1919, before returning to Tampa for afternoon and evening services.

With no auditorium large enough to accommodate immense crowds, organizers chose the grounds of the Summerlin Institute (present day Bartow Elementary Academy).  A large platform was built for the minister on the north steps of the gymnasium. The gymnasium built in 1915 was a standalone building which served the present day elementary school for years as a library before being razed to clear the playground.

The physical plant of the schools consisted of several buildings.  A new high school faced Wilson Avenue (present Bartow Elementary Academy) and the junior high  and elementary school were former Summerlin Institute buildings built in 1901 and 1887 which at the time faced north on Stanford Street.

The platform on the north steps of the gymnasium was built with an overhead sounding board to project sound.  The speaker’s pulpit was flanked on the northeast by the 1901 junior high school and on the northwest by the 1887 elementary school.   The three buildings formed an open horseshoe with the open end facing Stanford Street.

A choir and orchestra composed of local talent were issued special tickets for the occasion to insure early arrival and placement near Rev. Sunday’s famous worship and song leader Homer Rodeheaver.  Rodeheaver was a songwriter and music publisher who led Rev Sunday’s worship services, community choir, public singing, and special songs all interspersed with instrumentals played on his ever present trombone.

Both schools opened their floors to spectators and with open windows provided covered multiple story seating.  Over 5,000 orange crates turned upside down to accommodate seating were placed in rows extending north across the street around the First Presbyterian Church grounds.  Thousands came from around the county to hear this great evangelist. Bartow and Polk County heard and experienced the “old time religion”.

The service was reported on April 11, by the Polk County Record, local Bartow newspaper.  The editor expressed that, “when the history of Bartow is written, Sunday April 6th will stand out prominently as a day of events, and after Billy Sunday and all who were present on this occasion shall have passed to their reward, the good resulting from his visit here will live on”.

The service began with orchestral music provided by an African American band and local musicians.  Rodeheaver led the choruses and hymns, and after opening with Come thou fount of every blessing, he proclaimed, “ you need the Spirit of song in your life and in your home, the songs you sing, the smiles you wear is what makes the sunshine everywhere”. Other songs, Whosoever Will May Come, Revive us Again (male and female refrains), and the popular Brighten the Corner Where You Are, were followed by the city’s official welcome by Mayor Edward Mack. 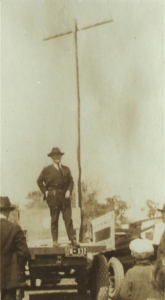 Rev Sunday posing on a truck before the service on Sunday morning. Photo captured on the grounds of the present Bartow Elementary.

The committees and workers were acknowledged followed by the offertory.  Rodeheaver reported that Rev. Sunday had agreed to come to Bartow without compensation and the funds would be used to offset the arrangements necessary for the service.  It was announced that additional contributions would be presented to Rev Sunday as a token of appreciation on behalf of the community. The gospel hymn, In the Sweet Bye and Bye accompanied the offertory.

Rev. Nathan E. Smith, pastor of the Associate Reformed Presbyterian Church, then prayed and introduced Rev. Sunday who followed with the morning sermon.  The text was taken from 2 Samuel chapters 12-15 and centered on the theme, “I have sinned against the Lord”.  The sermon was followed by an invitation to commitment, and prayer.  Homer Rodeheaver then led the closing hymn, “Stand Up, Stand Up for Jesus” and the first verse of America.  Rev. Sunday then closed the service with the Benediction.

Rev. Sunday had arrived early that day by train and after the service he and Rodeheaver were driven by local attorney Clarence Boswell and his seventeen year old son Clarence A. Jr. back to Tampa.  Teenager Gladys Jones took photographs passing down visual memories.

In his closing prayer, Rev. Sunday prayed that Polk County would attain great prosperity, that the farmers would have good crops, business men would make money, the orange trees would be heavy laden with fruit, and that the cattle would bring twin calves!   Hundreds made a profession of faith that day. In Fort Meade the newspaper later reported that Rev Sunday had a great admirer named C. W. Mills. It happened that the next evening after the sermon, Mill’s jersey heifer gave birth to twin calves!

No less a feat occurred in Tampa.  At Tampa’s Plant Field, two days prior to the revival service in Bartow, Billy Sunday, former professional baseball player, threw out the first pitch of a Boston Red Sox- New York Giants game.  Playing for Boston was George H. “Babe” Ruth who smacked a 587 foot home run setting a baseball record. It was the “Bambino’s” longest hit and the homerun ball was presented to Sunday.

It is estimated that over a hundred million persons heard Rev. Sunday speak during the many years of his ministry, and that more than a million made a profession of faith in Christ Jesus as a result of his preaching.  He was the first minister to employ radio for national evangelization and is credited with coining the term, “broadcasting” still used by radio and television.  He reflected that preaching over the airwaves to spread the Word of the Lord was not unlike the parable in the New Testament of the sower broadcasting  seed on various types of soil.

Years later during a revival campaign in Charlotte, North Carolina a young boy sat among a throng of Tabernacle worshippers and his heart was stirred.  The youth’s name was Billy Graham. Rev. Billy Graham would preach at Bartow’s Peace River Park, Easter Sunrise Service, 1961 as a part of the county’s centennial celebration.

The message is the same:  God, family, country, clean living, redemption, and civic responsibility.  Rev Sunday died on November 6, 1935 at the age of seventy five.

The next time you pass Summerlin Hill,  the present north playground of Bartow Elementary Academy imagine 8,000 men, women, boys, and girls singing hymns and hearing the good news of Christ,  April 6, 1919, one hundred and one years ago…. Oh, what a Sunday!

City of Bartow Emergency Administrative Order No. 2020-10
Scroll to top