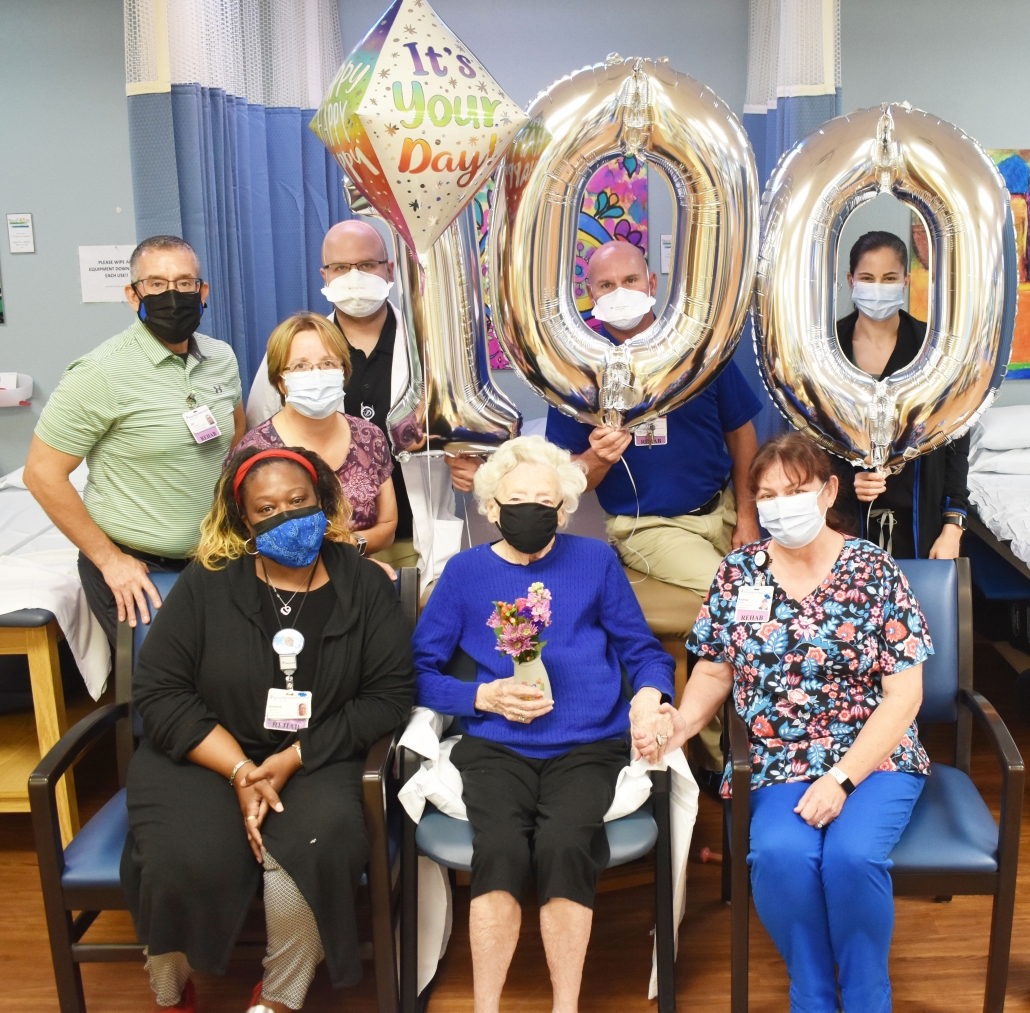 Bernice Johnston’s outpatient rehab team at Bartow Regional Medical Center wanted to make sure her upcoming 100th birthday got the attention it deserved. When she stopped in for an appointment just before the special day, they surprised Bernice with balloons and flowers. Bernice turned 100 on Feb. 28.

On March 2, the renovated Swann 4 unit opened its doors at Winter Haven Hospital, adding 24 medical/surgical/telemetry rooms. It is the conclusion of a five-year, $107 million, hospital expansion project. Construction for this three-tier hospital expansion began in 2016 with the Emergency Department expansion located at the south side of the main hospital, observation units for patients complaining of chest pain, and an updated psychiatric holding area. The Sterile Processing Unit was also expanded in this stage – doubling the space to 7,500 square feet and upgraded sterilization equipment.  Above it, a new home for the Bostick Heart Center was built in the second stage of the project, featuring five Cath labs, including a hybrid lab designed for minimally invasive heart procedures and another lab for electrophysiology. A cardiac diagnostics area and 12-bed prep and holding suite support the Cath labs.  The project also includes a 14-bed CVICU area. A third floor was also added, where 36 MICU and SICU rooms were built, adding 12 rooms.

The Haley Center, a nonprofit clinic that provides free health care services to low-income residents, is moving from its location in downtown Winter Haven to a larger space at the Gill Jones Center, thanks to a partnership with BayCare and Winter Haven Hospital.

The Haley Center opened its doors in 2005 to serve the indigent and uninsured. For nearly 15 years, it was located at 122 W. Central Avenue in a 3,000-square-foot space loaned to it by First Baptist Church – the Center was first created as an offshoot of the church before it became its own nonprofit. But as the Center came to serve more people, they found they needed more room.

“The church has been really gracious to us and we appreciate all they’ve done for us over the years,” Joe Cole, chairman of the Board of Directors, said.

Late last year, Winter Haven Hospital struck an agreement to rent 5,000 square feet of space to the Haley Center at no cost over the next six years. There are three phases of development, and the first phase involved the creation of five patient care areas (including triage and wound care rooms), a pharmacy, office space, a lobby and a waiting area. That was completed in December. In early January, the Haley Center began seeing patients in the new space.

The Haley Center is seeing patients at the Gil Jones location on Mondays and Fridays from 8 a.m.-2 p.m., and Tuesdays through Thursdays from 8 a.m.-5 p.m. The staff at the center includes Clinic Director Donna Armes, ARNP; Patricia Parker, ARNP; Oralia Gutierrez, administrative assistant, and Erika Shephard, office manager. To find out more about the center, call (863) 299-6562.

The Winter Haven Hospital Community Blood Center is currently seeking donations of all blood types. Those who want to give can donate at the center, 460 First St. N., Winter Haven, FL, 33881. The center’s Bloodmobile also continues to make various stops in the area as well. To find the one nearest to you, visit: https://whhcommunitybloodcenter.org/category/blood-drives/