Call the Fire Department! Quick, get down to the Seaboard Railroad Station!  It was Monday afternoon November 7, 1927 when the entire fire department, city fathers, and a crowd of interested citizens gathered at the freight depot on North Broadway Avenue in Bartow (present site of Sonny’s BBQ).

On the siding was a flatcar with a very large package.  A forty-foot long, 13,110 pound package was no small delivery.  A hush spread through the group of onlookers, which instantly turned into cheers, as the package was unwrapped.  The unveiling revealed a glistening, bright red, brass covered object of delight.  It was Bartow’s new fire engine.  This grand unveiling was quite a day in the history of the City of Oaks.  The engine had been ordered just six months earlier, and at a price of $13,500 figured about a dollar per pound.

It was the third fire engine purchased by the city.  The original fire engine was obtained in 1914 and had only one hose and chemical attachments.  Engine number 1 was used as a trade in for the newly delivered vehicle.  Engine number 2 had a triple combination apparatus consisting of a hose, pump, and chemical capability.  It was now slated to be a backup for the new Number 3 engine.

The American LaFrance Fire Engine Company of Elmira, New York manufactured the new fire engine.  A representative of the company accompanied the engine to insure proper delivery and instruction on the latest in firefighting equipment.  It was tested on the ground and driven before the city accepted its newest addition to civic improvement.

The fire engine itself boasted a three cylinder 8 piston engine with a two stage Powell Centrifugal Pump that generated 750 gallons of water per minute.  In addition, one 4.5 inch steamer connector with two suction hoses to pull from a hydrant or to be used to draft water from a local pond or lake, and three 2.5 inch discharge hoses ready to deliver a liquid treat to any hungry flame.

A manual release would make ready three 40’ extension ladders and three 35’ straight ladders. Other ladders included a roof ladder incorporating hooks for grabbing into tin roofing and riding atop all was the main 55’ scaling ladder.  Augmented equipment was nearly attached on all exterior sides.  This included red and white lanterns, six pikes, three axes, two Kelly prying tools and one pry bar.  The hoses were stored beneath the wooden ladders and surmounting the top ladder was a caged storage bin.

Just forward of the ladders was the thirty gallon, gravity fed, exterior fuel tank emblazoned on either flank with the gold numeral “3”.  A double leather seat insured room for the Engineer and Fire Chief.  Trailing down both sides from the cab were polished wood running boards able to accommodate at least a dozen or so volunteers to stand ready for action.

The Driver/Engineer drove and shifted on the right side and had quick access to the large searchlight mounted above the dash accompanied by chain driven rear wheels, leather belts, brass radiator, and a brazen, eagle crested bell finished off this modern marvel of the roaring twenties.  A large siren on the right front fender coupled with a straight exhaust and no muffler would immediately herald its coming.

Four days later at 2:00 in the morning the new engine witnessed its first service.  The call reported that a house in West Bartow was on fire, however when the firemen arrived it turned out to be a false alarm.  Just because there was no smoke didn’t mean the city wasn’t prepared to respond to the threat of flame.

What soon followed was the announcement of Section 44, City Ordnance 113 that stated: Upon the sounding of the fire alarm any vehicle, whatsoever description, excepting vehicles carrying firemen shall immediately draw to, and against the right curb, stop, and remain stationary for a period of three minutes.  Unless said vehicles are near the fire to which they shall move away and stop two blocks from where the alarm has been sounded. All vehicles are to be at least 200 feet from all fire fighting apparatus.

The newspaper reported; It is big, It is long, It is fast! It needs an open road, and plenty of room, especially at intersections where it might have to turn.  There was also a call for cars to stop chasing the new fire engine to fires.  The Fire Department soon asked that cars stop for at least five minutes, instead of three, to allow the big engine to have time to pass through the streets.

There were 12 distinct fire alarms in those early days, consisting of long and short whistles, or a combination of long and short blasts, designating different parts of the city.  Bartow had been divided into twelve wards determined by street boundaries.  As an example; Ward 6 was the area between Wilson Avenue and Broadway, north of Stanford Street and south of Davidson.  The fire alarm for Ward 6 was two long and two short blasts of the signal.  This was implemented to direct the volunteer firemen immediately to the area of alarm.

Fire Engine No. 3 served Bartow for many years and was called to Fort Meade at least once to assist that town’s fire department.  By the 1950’s, updated equipment, and newer fire engines, pushed the proud old engine into retirement, but not out of service.  It is still maintained by the Fire Department and volunteers.  Look for Engine No. 3 carrying children and firefighters in parades and often as an illuminated display in front of the Fire Station at Christmas.  No longer housed in the active bays of the fire station this valuable classic antique has a garage of its own.  It is a link to our modern past and serves as a representative of the duty, ready service, and sacrifice, of Bartow’s firefighters.

When asked how it compares to a modern fire engine, one firefighter expressed, “it was like comparing a Model T to a Corvette”.  Perhaps, but when I see the old engine coming down the street in a parade, it ignites my heart and soul, with the same thrill as the small children standing next to me on the curb. The wail of the siren, the clanging bell, the big shiny red engine, the long ladders, the polished brass, and yes… the big gold Number “3” , makes one reflect,  “When I grow up, I want to be a fireman”!

The City of Bartow Fire Department no longer numbers their vehicles according to placement in service, and Bartow’s Fire Engine Number 3, ninety two years old, is still the city’s treasured beauty. 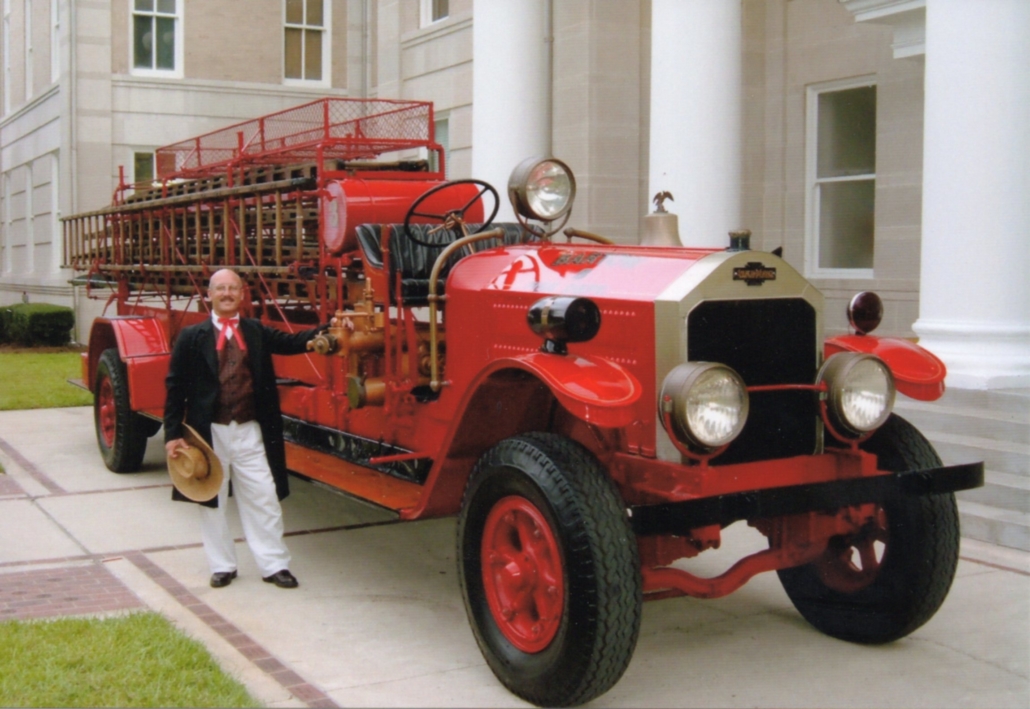 Lloyd Harris standing next to Fire Engine 3, on display, during Bartow’s 125th anniversary of the chartering of the Bartow (1882) by the Polk County History Center (old court house) in 2007. 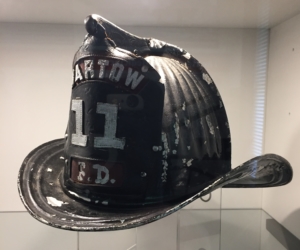