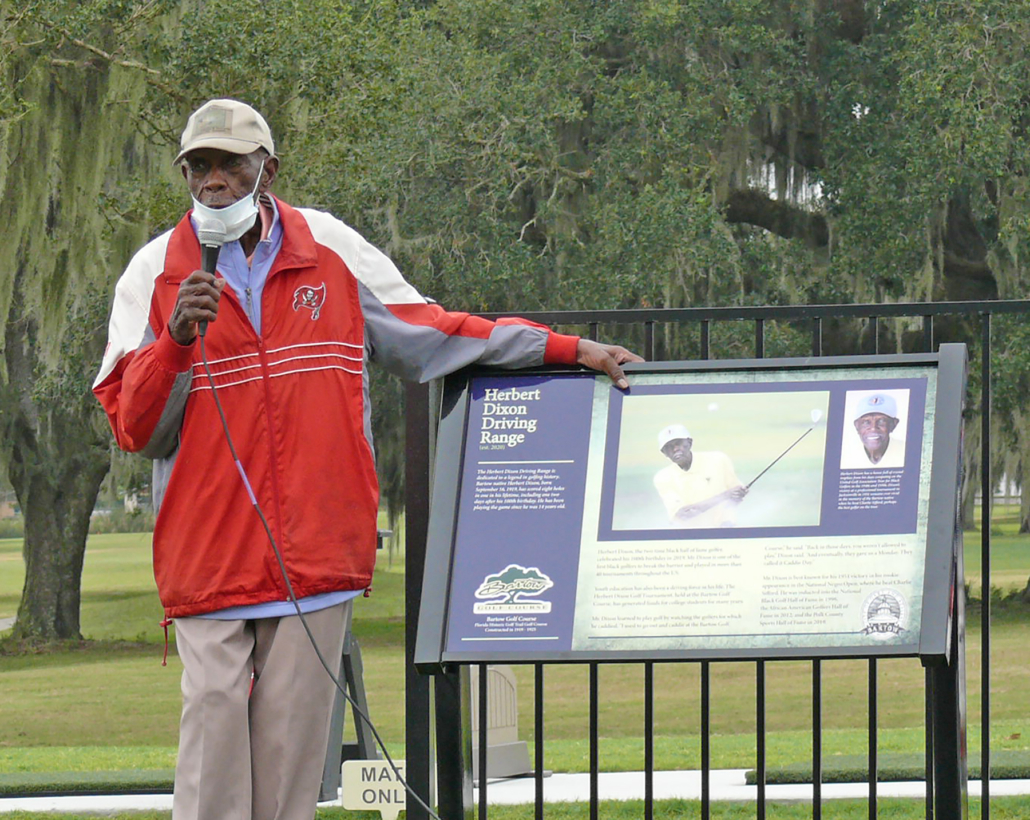 Mr. Dixon was unaware that the driving range would be named after him, and following the unveiling, he spoke to the crowd of 75 that his 101 years have taught him that sometimes you have to yield in life; and after having a hard road to travel, it is important to live each day as it comes.

“Herbert Dixon, the two-time black hall of fame golfer, celebrated his 100th birthday in 2019. Mr. Dixon is one of the first black golfers to break the barrier and played in more than 40 tournaments throughout the US.

“Youth education has also been a driving force in his life. The Herbert Dixon Golf Tournament, held at the Bartow Golf Course, has generated funds for college students for many years.

“Mr. Dixon learned to play golf by watching the golfers for which he caddied. ‘I used to go out and caddie at the Bartow Golf Course,’ he said. ‘Back in those days, you weren’t allowed to play,’ Dixon said. ‘And eventually, they gave us a Monday. They called it Caddie Day.’

Following the unveiling and ribbon-cutting ceremonies, Mr. Dixon hit the first official ball from the driving range. Golf Team students from Florida Southern College who had learned to play at Bartow Golf Course were also on hand to hit balls and give tips on the game.

It is interesting to note that the Bartow Golf Course history itself began the very year that Mr. Dixon was born in 1919. Mr. Dixon has scored eight hole in ones in his lifetime, including one two days after his 100th birthday. He has been playing the game since he was 14 years old.

The City of Bartow Golf Course is on the Florida Historic Golf Trail. It is located at 190 Idlewood Avenue. For more information, call Chris Banks, 863-533-9183.

Doing Business During Covid-19: you don’t have to go it alone
Scroll to top