After Gravy, the Gridiron!

You are here: Home1 / Capital City Bartow2 / After Gravy, the Gridiron!

After Gravy, the Gridiron

A national day of thanksgiving and prayer with its origin dating back to the Pilgrim Fathers in colonial times became official during the Civil War.

In October 1863 President Abraham Lincoln appointed a day of national thanksgiving during the period of this nation’s darkest hours. Lincoln’s  proclamation stated, “I do therefore invite my fellow citizens in every part of the United States, and also those who are at sea and those who are sojourning in foreign lands, to set apart and observe the last Thursday of November next, as a day of Thanksgiving and Praise to our beneficent Father who dwelleth in the Heavens.”

In 1939 President Roosevelt moved the holiday to the fourth Thursday in November to boost the economy, and in 1941 the date was fixed by legislation. The holiday has been an annual celebration ever since.

I have many fond recollections of Thanksgiving.  The entire family gathered together waiting for dad or granddad to say grace before consuming mass quantities of good food, turkey, dressing, and pumpkin pie. Then, after gravy, the gridiron!

That’s right, football! American football was developed in the 19th Century from association football or soccer and principally, rugby. It is played by amateurs and professionals, generally high school, and college teams, and is one of the most popular American sports.

The birth date of football is generally regarded by historians as November 6, 1869 when Rutgers University played Princeton. The first professional football game dates to 1895 when paid teams from Latrobe, and Jeannette, Pennsylvania met on the scrimmage line. The first game played in Polk County was played on the parade field of the South Florida Military Institute (later College) in Bartow when cadets from Company A and Company B took a turn at this interesting contest on Thanksgiving Day, 1903. The military college parade field was located adjacent to South Broadway and north of Tharp Street in front of Bartow High School.

Football fever soon spread.  By January 1906, the high schools were following suit.  An embryonic team was pulled together at Bartow’s Summerlin Institute (now Bartow High) with Lawrence Summerlin as the first team captain. No games were played that year.  The game was rough, mostly rushing through the middle or flanks as the rule. The forward pass was just being introduced to the game and by the next November the stage was set.

The first week of November, 1907, witnessed Bartow again organizing a team with Glenn Skipper, a noted football player, coaching the team. Practices were held every day with expectations of fast playing on the field. Two games were scheduled for this year – a big lineup with Lakeland and Tampa teams accepting the challenge.

By the second week of November a firm date had yet to be set. Everyone in town was interested. The newspaper quipped, “Nothing develops the physical manhood of a boy like football!”

By the end of November’s third week, the gauntlet was picked up by Lakeland.  The date of the game was scheduled for Thanksgiving Day. On Monday night a crowd of high school students and teachers met in the school’s auditorium to practice “yells” to cheer the home team on to victory at Thursday’s game. The high school at that time was located at the northeast corner of Stanford Street and South Florida Avenue north of present day Bartow Elementary.

The playing ground would be the empty parade field of the former South Florida Military College, which closed a couple years earlier. Some speculation existed, and it was considered that the game would be close, as Bartow’s boys averaged 145 pounds, and Lakeland’s team had only a few pounds to advantage. Bartow’s team exclaimed, “They didn’t mind bucking a few extra pounds and were determined to have Lakeland’s scalp!”  The call went out to the community to wear Summerlin’s new team colors, orange and white.  Lakeland would be wearing black and white and coming in large numbers. Admission to the game was set at .25 cents.

Thanksgiving Day 1907, dinner was over in the City of Oaks, and the crowds gathered at the old military college parade field.  Everywhere people were sporting colors, orange and white, black and white.  Lakeland won the toss and chose to defend the south goal (Tharp Street).

Promptly at 3:00 p.m., Summerlin kicked off to Lakeland and in less than a minute a fumble turned into Bartow’s first score. Emerson Harless ran for the first touchdown. A kick by the left halfback added to the score. Other Bartow touchdowns were made in rapid succession. In fact, all Summerlin needed was the ball.

On the first down the home team would trample the opposition and chalk up another touchdown. The score at the end of the first half stood at Summerlin 21, and Lakeland 0.

During the second half Lakeland substituted two players, but Bartow held to its original lineup. Punching through the line, coupled with end runs, garnered the Bartow team six more touchdowns. Lakeland had gone to pieces.

The Summerlin team’s sweetheart, and sponsor, Miss Nellie Dunlap was soon smiling, as Bob Whitney blew his referee’s whistle closing the combat on the gridiron. The game ended in favor of Bartow’s Summerlin Institute scoring 53 to Lakeland’s 0.  The crowd’s school cheers and display of orange and white was noted to be an encouragement to the home team and disconcerting to Lakeland.

Bartow’s team admired its first opponents, and gave them a rousing cheer. The “orange and white” continued to dominate the field.

The next year (1908) Rollins College, Orlando High School, Stetson College, and Tampa’s Hyde Park Professionals were met and soundly defeated. Summerlin was the undisputed and undefeated team in the State of Florida.  Summerlin earned a year end score totaling 99 points to all its opponents’ score of 5.   The succeeding years of 1909-1912 were repeats and Bartow continued to rule the gridiron as the Champion Football Team of Florida.

In 1924, the “Yellow Jacket” became the team’s mascot, when a coach tried to change the team colors to purple and gold.  The newspaper reported, “The team, town, alumni and teachers swarmed on coach Yarborough like Yellow Jackets, keeping the orange and white.”

Bartow’s water tower on South Broadway tells the story, look at the logo, “Jake the Jacket” holding a football, and blazoned over his head, “Bartow Home of Champions.” It all started on Thanksgiving Day, 1907.

This Thursday don’t forget to give thanks for God’s blessings, and a free land where Thanksgiving Day gravy and the gridiron can also include goodness and giving and definitely a football game! 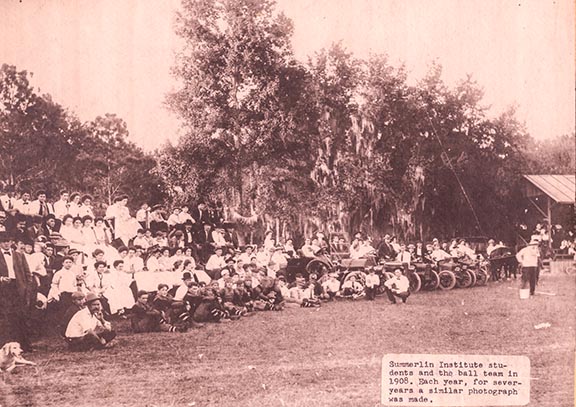 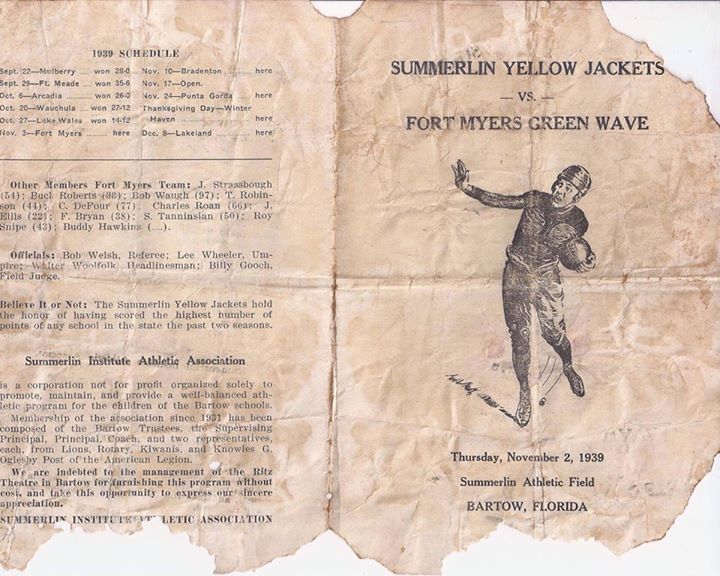 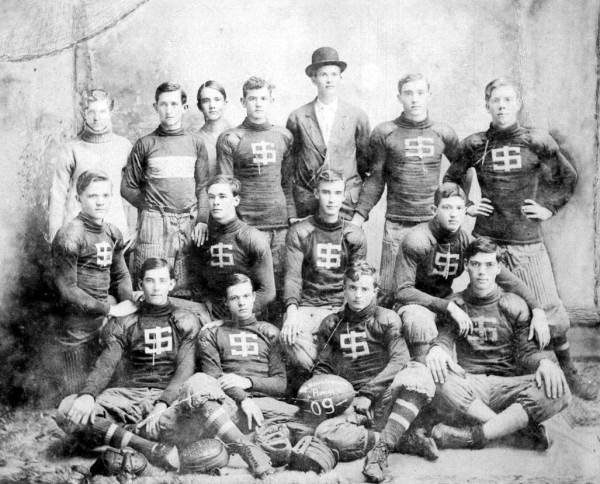 DECEMBER-JANUARY HAPPENINGS AT THE HISTORY CENTER!
Scroll to top