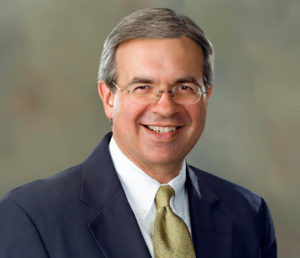 GiveWell Community Foundation announced today that the organization’s board of directors selected John Attaway, Jr. as president and chief executive officer, effective April 1, 2020. The decision was made at the January 28th board meeting, when the CEO search committee presented their recommendation to the board of directors who voted to approve Attaway as the organization’s next president/CEO.

“We are thrilled to have someone of John’s caliber and reputation as our new president and CEO,” said Jeffrey Cox, Sr., chair of the board of directors. “John’s leadership skills, passion for the communities we serve, and vision for the future of the GiveWell Community Foundation are exceptional.”

“I am honored to have the opportunity to work in service of the foundation and this community – one of the most generous and philanthropic communities in the nation,” stated Attaway. “I have always been inspired by the remarkable work of our community foundation. It has been exciting to watch the organization’s impact and collaboration grow in Lakeland and Winter Haven and now throughout all of Polk and Hardee and Highlands counties.”

As previously announced in October 2019, Terry Simmers, the foundation’s current president/CEO, will retire after a successful 12 years of driving the organization’s overall strategy and vision. He will depart September 30, 2020. Simmers expressed confidence in the board’s choice. “John is a great leader and valued member of our community,” said Simmers. “I am very happy with the board’s decision, and confident that John will ensure the community foundation continues its mission of championing charitable giving to improve the quality of life in the areas we serve, both now and for future generations.”

The board of directors also voted to promote Lori Martini to vice president. As vice president and chief philanthropic officer, she advises the foundation on philanthropic issues that affect our community. Martini, who has been with the community foundation for 12 years, currently serves as a board member of the Lakeland Area Chamber of Commerce, Polk Vision’s Operating Board and Talent Pipeline, Estate Planning Council of Polk County, and the Advisory Board for the Polk County Continuum of Care. She attended Penn State University and is a graduate of the U.S. Chamber Institute for Organization Management, University of Georgia. Martini is also a graduate of Leadership Lakeland Class 28 and Leadership Polk Class 6. Prior to joining the community foundation in 2007, she served as vice president of communications with the Lakeland Area Chamber of Commerce for 12 years.

About the GiveWell Community Foundation

GiveWell Community Foundation (GWCF) works with individuals, families, businesses, and nonprofits to build a stronger community throughout Polk, Hardee and Highlands counties and beyond through charitable funds and competitive grant cycles. The foundation is home to more than 300 charitable funds and the Impact Polk and Empower Polk grant cycles. GWCF has awarded $209 million in grants since its founding in 1997. To learn more about GWCF, visit givecf.org or call 863-683-3131.

The Boom In Bartow: The Roaring 20s