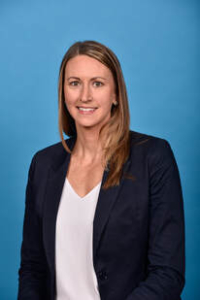 ORLANDO – Lakeland Magic’s Shelly Wilkes was recently named to SportsBusiness Journal’s (SBJ) Forty Under 40 class of 2020. Wilkes is currently president of the Magic’s G League team, the Lakeland Magic, serving as the only female president in the NBA’s G League.

For 30 years, the SBJ has recognized 40 executives for excellence and innovation in their careers, all before the age of 40. Wilkes is one of three Magic employees to be recognized for this great honor over the 30-year span of the award, the other two include current Magic President of Business Strategy Charlie Freeman (2012 class) and former Magic Executive Vice President of Strategy Anthony Perez (2017 class). Wilkes, and the others selected, will be honored at the Forty Under 40 Awards Banquet on March 26 in Dana Point, California. In addition, all honorees will be featured in SBJ’s March 16 issue.

“Shelly has provided tremendous leadership with the Lakeland Magic and guided the team in its infancy stages to many great successes,” said Orlando Magic CEO Alex Martins. “We are so proud of her many accomplishments and congratulate her on this significant and well-deserved honor. She has been a trailblazer in the G League, through her vast corporate partnership relationships and successfully negotiating the only arena naming rights deal in the league. We look forward to her having a long, fruitful career in the sports industry.”

Wilkes’ is responsible for the day-to-day business operations of the Lakeland Magic, and has spearheaded naming rights deals, arena renovations, corporate partner signings, and innovation in ticket sales. Specifically, she was instrumental in leading the charge to bring professional basketball for the first time to the Lakeland community in 2017-’18. She has led several of the G League team’s most significant accomplishments including the naming rights deal with the City of Lakeland to rebrand the former Lakeland Center to the RP Funding Center; along with overseeing the opening of a new practice facility this year partnering with the City of Winter Haven and Polk County on this endeavor.

Wilkes spent 13 seasons with the Orlando Magic, starting as the group sales coordinator in 2004. She held multiple positions within the sales and marketing areas of the company, most recently as the senior director of live entertainment and production services in July 2015 before being named the president of the Lakeland Magic in December 2016. She is a graduate of the University of Central Florida, earning her bachelor’s in general business and master’s degree from the DeVos Sport Business management program in both business administration and sport business management.

MARCH HAPPENINGS AT THE HISTORY CENTER!