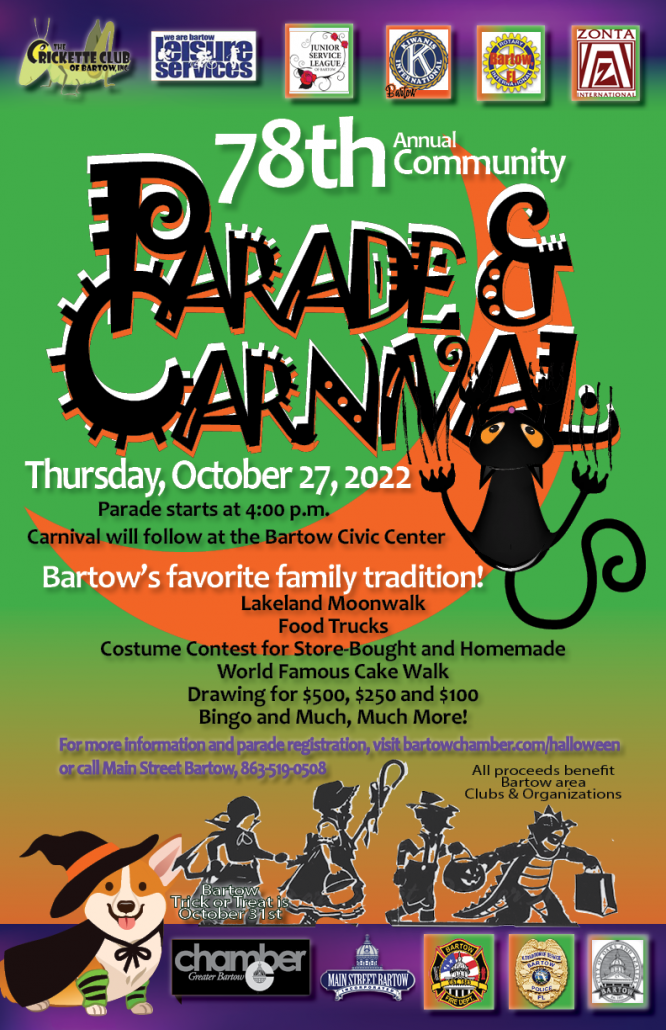 The 78th Bartow Community Halloween Parade & Carnival will be held Thursday, October 27th, 2022. The last time the event took place was in 2019, when the Crickette Club of Bartow kept the parade and carnival going for all those years. A Community Halloween Parade and Carnival Committee has been formed to assist the Crickette Club, and the show WILL go on!

The parade will line up on First Avenue (next to the Chicken Shack) and will begin at 4:00 p.m. The parade route will remain the same, except for it will end at Park Lane, near the Bartow Civic Center, rather than at Mosaic Park. Mosaic Park is currently in the process of getting new soccer fields, so will be unavailable to use for the Carnival.

Most of the carnival games will be around the east parking lot of the Bartow Civic Center. Food trucks will be parked on the north side.

“We walked the perimeter and figured out where all of the games and vendors would logically go,” said Committee Chair Jennifer Hall of the Crickette Club.

The Bartow Fall Parade and Carnival has been a traditional event of the Crickette Club for 77 years. “We hope to keep the tradition alive,” said Hall.

Will take place rain or shine. The parade begins at 4pm. The carnival begins once the parade reaches the carnival grounds at the Bartow Civic Center; usually about 5pm.

Please make sure to drink plenty of fluids.

Past events have been extremely hot and humid.

There are bathrooms available at the Bartow Civic Center.

Please report anyone seen throwing candy from a moving parade unit here or text to 863-535-5088.

Registration is free and begins at 5:30pm. First contest begins at approximately 6:00pm.

We’ll be able to accept credit/debit cards at the carnival grounds this year to purchase game/ride/chance drawing tickets. Please visit the Information Booth. Absolutely no refunds will be issued.

Activities will vary, but they will include running the games at the game booths; assisting carnival patrons, especially children; working lost and found; directing traffic; and clean up. Community service hours available.

Send an email to bartowhalloween@gmail.com if you would like to volunteer.

>Begins at Main St and First Ave; in front of the Chicken Shack

Parade Fees
There is a fee for entry into the 2022 Bartow Community Parade that must be paid when the application is submitted. The fees are $25 for individuals, groups, and businesses; and $50 for politicians and political groups; unless you meet one (1) of the below fee exemptions. PayPal is the application used to collect parade fees. You do not need a PayPal account to use the online system. All fees collected help to fund the Bartow Community Parade & Carnival.

Parade fees are only refundable with written notice by the parade entrant three (3) days prior to the event. Units that must leave the parade for any reason, including violation of the parade rules, will not receive a refund of their parade entry fee.

Parade Lineup
1. Units line up on a first come basis within their assigned section. Please inform all
participants in your unit of the assigned section number. Your section number will be
assigned after your application is submitted and approved.
2. A map of the section placement will be provided once your section number is assigned.
3. All parade participants must be in line by 3:00 PM. After 3:00 PM, First Avenue and
Second Avenue will be one-way traffic northbound only. The parade begins promptly at
4:00 PM.

Parade Rules
1. No tossing or throwing objects, such as candy or beads, from parade units. Items may be handed out by walkers who are 12 years of age or older. Penalty for anyone caught
breaking this rule is ejection from the parade. Those units seen throwing candy will not
be allowed to participate in the 2023 parade.

2. All units shall be appropriately decorated. Your entry should be family-friendly and G-rated. Those entries deemed inappropriate will not be allowed to participate.

3. Maximum height of a unit is 16 feet; to allow passage below power lines and traffic
signals.

4. No unit may pass another unit during the parade unless advised by a Parade Marshall. Keep a safe distance between each unit.

6. Only one vehicle per unit, unless prior approval received. This information should be
included in your parade application.

7. Bicycles shall not move alongside parade units, to prevent accidental injury.

8. Parade unit drivers must be at least 16 years old with a valid driver’s license.

9. Anyone operating a unit in an unsafe or careless manner will be told to leave the parade and will be held solely responsible for their actions.

10. Any person(s) causing a disturbance will be told to leave the parade and will be held solely responsible for their actions.

11. All participants must complete the entire parade route. Dropouts cause hazardous
conditions.

12. The parade is rain or shine. In past years, the day of the parade had been hot and
humid. Take precautions to avoid heat related injuries, including proper hydration before, during and after the parade.

13. Bathrooms are not provided at the parade staging area.

Parade Awards
Units are judged and awards are given in the following categories: Best Professional, Best Non-professional, Most Original, Best Decorated Car/Truck, Best School Unit, Best Church Unit, and Best Marching Unit. Winners will be announced and awards will be displayed next to the stage at the Bartow Civic Center during the carnival.
All units should be conspicuously identified, so Parade Judges know who you are and/or whom you represent. 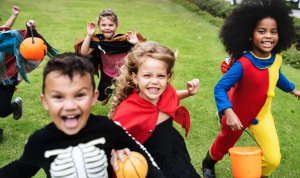