You are here: Home1 / Capital City Bartow2 / Every Vote Counts!

Edmund Burke warned, “All that is necessary for the triumph of evil is for good men to do nothing.”  Each of us has the “power of one.”  How would you use it?

One vote by Delaware delegate Caesar Rodney in 1776, approved independence from Great Britain. Rodney was suffering from terrible cancer of the face. He rode through a rain storm 90 miles to Independence Hall in Philadelphia, Pennsylvania. President John Hancock posed the question, and independence was approved as Rodney voted, “Aye.”  Without the vote of Caesar Rodney the fight for independence would have died.

One vote of two state congressional delegations crossing the party line in 1800, gave Thomas Jefferson the presidency, becoming our third president, after receiving a tie in the Electoral College. Those individual votes together, prevented Aaron Burr, later charged with treason, from becoming President. The deciding vote was in the U.S. House of Representatives on the 36th ballot.

One vote ratified the Alaskan Purchase in 1867, paving the way for admission of America’s largest state in 1958.  Alaska was purchased from Russia for $7.2 million dollars.

One vote admitted Washington to statehood in 1889, and likewise in 1890 one vote brought Idaho into the union of states.  Ten years later, one vote authorized the annexation of the Philippines, Guam, and Puerto Rico into the commonwealth.

One vote in the U.S. House of Representatives in 1918 passed the resolution to amend the Constitution to state that, “voting should not be withheld on the basis of sex.”

The following year in 1919, one vote in the U.S. Senate passed the same resolution to amend the Constitution paving the way for the 19th Amendment to the U.S. Constitution granting American women the right to vote, a right known as women’s suffrage, which was ratified on August 18, 1920.

There are many other “one vote” occurrences that have influenced the life of our communities and nation. 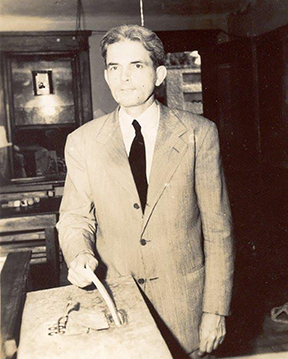 The importance of your individual vote can’t be stressed enough.  I have just shared a few instances how a single vote made a difference.  One such time occurred in the Bartow back in 1882.

The Civil War was concluded in 1865, and what followed were 11 years of reconstruction government in Florida. Polk County was still very much a wilderness, experiencing slow growth in both population and economic development. With the final dark days of the war and its aftermath, the people were free to move ahead. Raising cattle was the primary business in the area. A few orange groves were in their infancy, and farming was commonplace.

The 1880 United States Census enumerated seventy seven individuals in the small community of Bartow.  The other nearby communities showing promise were Fort Meade, Socrum, and Medulla (present day suburbs of north and south Lakeland).

Two years later Bartow had grown from one dwelling, a court house, general store, and Masonic Hall doing extra duties as the school, church, and community center, into a progressive community. It was the largest town in the county and could boast a county court house, a hotel, three general stores, a Baptist and Methodist church, a telegraph office, two blacksmiths, a wheelwright, two doctors, a drug store, two milling shops, a Masonic hall, a school averaging 40 pupils, and one lawyer.

The newspaper reflected, “The lawyer had to resort to other means for a living,” and a post office running mail to Tampa, Orlando, and Fort Meade. A hack line or stage coach made three trips a week to Tampa. The hack would leave Tampa stop at Cork (Plant City) and arrive the following day.  Tthe town could also boast a photographer, a newspaper, and as the editor of the local paper quipped, “No rum shops!”

Bartow was mindful of her standing and was seeking other means of growth. Town lots had been surveyed and newcomers were starting to arrive in a steady flow. Even with the growth of the fledgling community, it wasn’t long until the morally upright exterior was broken by an element of wild frontier life, not unlike the glamorized tales of the Wild West.

A photograph of Main Street about 1885-1886, in the Town of Bartow, just three to four years after the incorporation of the city. The photo was taken at the approximate present location of the north side of the intersection of Carpenter and Main facing East. Note the building on the left is the 1885 Court House. The white building to the right of the court house is The Drug Store and would have occupied the present NW corner of Main and Broadway. The fourth building from the right, white with a double door open on the second floor was the Captain David Hughes store (present site of Palace Pizza.) Note the dirt road, buggy and horse and the lone telegraph pole in the foreground. The trees lining the middle of the street were orange trees, and flourished there for a few decades. (photo Lloyd Harris collection)

An unfinished dwelling, standing in the vicinity of the present day Post Office, witnessed the birthplace of a new saloon. Reckless, indiscriminate shootings, and various misdemeanors, became commonplace in the dark of night.  The people’s patience was exhausted when bullets began passing into homes.  The need for a Town Marshall was evident.

There was a prospect of increasing civic growth. Henry Plant’s railroad was under construction and coming to the interior of the state.  Leading citizens, prompted by the hope of continuing prosperity, recognized the need for a more solid standing. It was decided to approach the State Legislature in Tallahassee for incorporation as a municipality. Bartow’s hearty, “Welcome to all” was to be a reality.

The townsmen met on May 3, 1882, and laid out plans for incorporating the city. By the end of the month the city limits, measuring four square miles centered on the court house, had been surveyed.  The corporate limits encompassed one mile north, south, east, and west of the hall of justice.

The newspaper reported, “Our citizens’ hope, by taking the duties and responsibilities of a municipality upon themselves, to be able to counteract the evils of a bar room, which is to be established at once with a capable officer as Mayor, and a good Marshal, there is no doubt but the usual good order may be maintained.”

The date of the election was fixed, but a difficulty was encountered.  Article VIII of the Florida Constitution allowed for incorporation of municipalities, and in order to secure a town charter, there must be a minimum of 25 eligible voters in the proposed limits of the new town.  It was found that only 24 eligible voters could be secured. The citizens of the prospective city of Bartow seemed to be . . . one man short. Eligible voters were restricted at the time to men, 21 years of age or older.

The Bartowans were determined not to be outdone.  A like-minded citizen was necessary to meet the state requirement.  Casting their eyes toward the rising sun was a nearby homestead.  The local surveyor was tasked to extend the line of the city limits 1,700 feet, on the east side of town, so as to take in the prospective 25th voter.

It was to the home of Prince Johnson, a black man, born in slavery, in Virginia, some 47 years before, that the surveyor’s chain now sought. Prince, his wife Jennie, and seven children, were no doubt amazed at their new found importance. Johnson had homesteaded 80 acres of farm land, and was a longtime resident and well digger. Prince Johnson was to cast the deciding vote in favor of a new town. 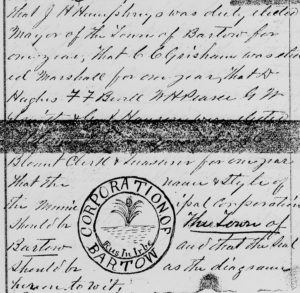 City Seal as depicted on the original City Charter 1882

The election was held on July 1, 1882. Captain David Hughes, Bartow’s leading merchant, presided over the election. The necessary favorable voters promptly cast their ballots, and the City of Bartow became a reality. A city seal was drawn, depicting a pineapple, a symbol of hospitality and welcome, underscored with the motto, Urbs in Rure, a city in the country.

What followed was a virtual boom in development and growth in the city. One vote insured the realization of this grand City of Oaks known as Bartow.

Governments of a free people still derive their just powers from the consent of the governed, and in 1882 one vote determined a City.

Every vote counts . . . and this has been an Imperial Moment. 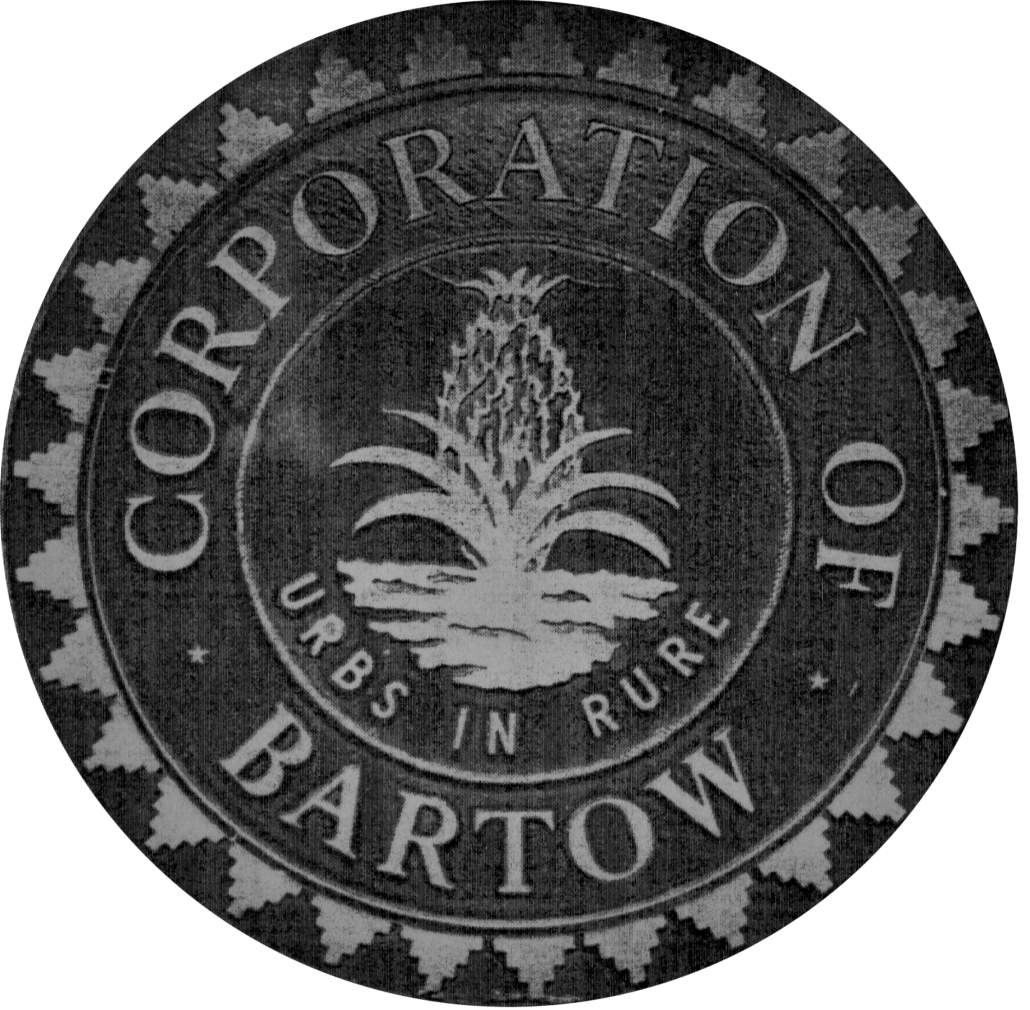 Corporation of Bartow Seal 1979. This seal used to grace the wall,behind the City Commissioners bench, at City Hall, and is a professional rendering of the original 1882 drawing in the city charter.